THE DEFINITIVE HISTORY OF DAVEY, PAXMAN & COMPANY
(up to 1922)

Steam & the Road to Glory:
The PAXMAN Story

The firm of Davey, Paxman & Co. was one of the great steam engines manufacturers of the 19th century and one of the few firms which later made diesel engines too. The founder of the firm, James Paxman, was an extraordinary man. Born in poverty, he founded, in Colchester, a busy firm of agricultural engineers. His greater feat, however, was to diversify: into gold and diamond mining, into the heroic early days of electricity generation, into refrigeration and gas engine manufacture. 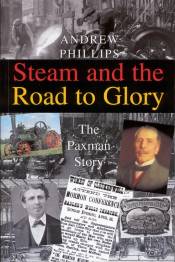 Andrew Phillips, formerly Head of Science & Humanities at the Colchester Institute, spent 24 years compiling a history of this firm and a business biography of James Paxman, drawing on a mass of private papers, extensive business records and over 10,000 letters. The result is one of the most detailed accounts of a provincial Victorian engineering firm ever written, following Paxman's business triumphs: the first international exhibitions lit by electricity, going to France to light the Eiffel Tower, walking the Aswan Dam, hosting the famous at Stisted Hall: Rudolph Diesel, Cecil Rhodes, Buffalo Bill, Lady 'Daisy' Warwick. The book also shows how engineering struggled to compete with Germany and America, going into freefall after the Great War, reviving on the call for armaments in 1939.
Born of a broken home, Paxman made a fortune and almost lost it. He was inexhaustible, irrepressible, living till he was 90.

Based on research in London, South Africa and America, this is a compelling biography and family saga; a detailed reconstruction of an engineering firm. With over 500 pages and 300 illustrations, it is a definitive book. Two local figures have read the proofs:

Professor Geoffrey Martin, University of Essex: 'Formidable, and admirably done... it deserves the widest possible audience.'
Bob Russell, M.P. for Colchester: 'A monumental book about a monumental man. This will transform our view of Victorian engineering.'

NOW OUT OF PRINT

The book was first published in 2002. The initial print-run was 500 copies. A second print-run of 500 copies, with minor corrections was done. All copies of the first and second print-run have now been sold. It is suggested that anyone wishing to secure a copy, tries contacting sellers of second-hand books.